Bats usually don’t have much of a positive public image. Considered to be bloodthirsty beasts, these small flying mammals are more terrifying than inspiring most people. But without them, our DynaCrop service wouldn’t be able to monitor soil moisture conditions in any field in the world.

There are several situations when both people and animals cannot see obstacles that are in front of them. Whether it is a large tree, a stone wall or an upcoming drought. In all such situations, one might use an active remote sensing principle known as echolocation, sonar, or radar.

The basic idea is simple. If you can’t see, simply send a signal or pulse of sound and listen carefully to what comes back. Originally developed by nature for bats, it allows them to fly in deep caves without any danger. Moreover, they can precisely locate their food and where it is heading while flying at the same time.

Modern-day radar is using the  same trick. Originally standing for radio direction and ranging, the system was developed secretly for the military during World War II. Nowadays, radar is used for peaceful purposes across sectors. Planes use it to know how high they are, meteorologists use radar to monitor rain and wind, and your car is probably already using radar to prevent collisions with other cars. Also, did you ever notice that radar is a palindrome and you can read it the same way forwards and backwards?

The idea that satellites are watching us from orbit is not sci-fi anymore. In fact, most of you work with satellite images daily, primarily in the form of maps in your mobile applications.  While most satellites are currently producing something we could simply call images, other types are using different technologies.  You might be shocked to know that a bat-like technology is one of them.

Employing a radar sensor on a satellite extends our ability to monitor natural phenomenons across the globe. The magic behind it is the same. The satellite keeps sending electromagnetic signals towards the Earth and carefully records what comes back. One example of such satellites are the Copernicus Sentinel 1A and 1B, operated by the EU and the European Space Agency. Since 2014, Sentinel 1 has provided free radar satellite data to everybody who wants to use it.

In fact, radar satellite sensing is anything but simple. It really matters what kind of wavelength the signal sent by satellite has, how polarisedit is, from which angle it is sent, and so on. You can imagine that the data gathered by such satellites are super hard to analyse. In fact, after multiple rounds of preprocessing, it still looks like this:

However, advanced data analysis provided by companies such as World from Space allows extraction of the hidden information and gives it directly to those who need it. A first glance of chaos actually hides many treasures.

To help farmers struggling with drought, irrigation or precision fertilising and seeding strategies, we have developed a new service monitoring the amount of water available for crops in the field. It is called the Soil Moisture Index and it is available through our DynaCrop service. We take advantage of the fact that dry land reflects the signal from radar satellites differently than wet soil.

Analysing all available radar data from Sentinel 1 satellites, we can estimate the actual level of soil moisture and current trends in any field in the world. Moreover, we can put all of this information together and identify zones that in general have more water available for crops than others. Farmers then use this information to increase their yields by changing the way they seed and fertilise their fields.

And another great thing – the service is available every 3-4 days, even in cloudy weather.  Unlike optical satellites, radar satellites can see even through clouds. If you use technology developed and tested by bats, you don’t need to see. You can always send a signal and wait for what comes back.

At DynaCrop, we are integrating satellite monitoring into digital farming to increase yields and make easier decisions. Just send us a signal you would like to know more and stay tuned for our reply. 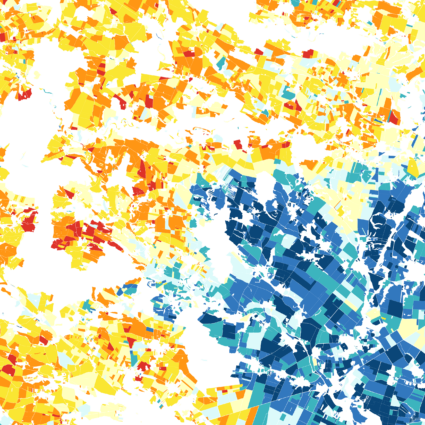 How field scouting can solve problems before they become serious